Exceptional Couple Who Never Gave Up 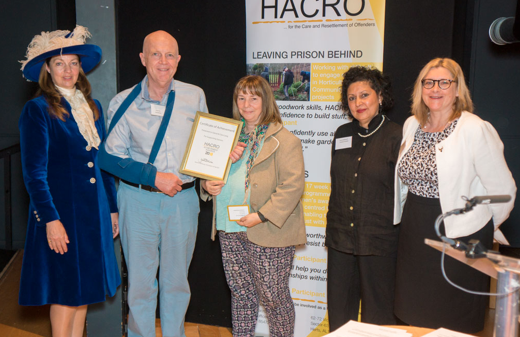 HACRO Achievement Awards celebrate the success of some of those who have not only turned away from crime but have turned their lives around; and they also celebrate those who helped them make it happen. This is one of those stories.

Darryl and Clare supported their son through periods of erratic and criminal behaviour: he is free from crime since Dec 2016 and sober since Christmas 2017. Darryl and Clare are the epitome of steadfast and loving parents who again and again return to support an apparently undeserving son.

He suffers from a mental health illness resulting in sometimes erratic behaviour and a predisposition to addiction. He is alcoholic – though happily now in recovery – also employed, active and well and is continuing his work to achieve resilient recovery. When drinking, he was sometimes violent, leading to many stays in jail. This turn-around by their son is due in significant part to his parents who have frequently sacrificed their own wellbeing and their own choices in order to support him – even when he didn’t deserve it. They never gave up on their son and now they are able to enjoy his success with him.

Kim Hobbs, CEO of Cornergate Foundation, who nominated Darryl and Clare for an Award for Supporting Success, said, “To spend an evening delivering a life-affirming event for people who have not until now valued themselves much is such a great thing and will live long in their memories – and ours!  I wanted to stand up and clap for everyone!”

Kim added, “One highlight for me was when the son – whose parents Clare and Darryl received an award – thanked me for bringing him along.  He was nervous to attend with his past being in the spotlight.  So being there was a great thing and he said to me: “That was a great evening, I’m glad I came, it was so inspiring.””

Yasmin Batliwala, President of HACRO said, “We’re delighted to celebrate Darryl and Clare’s unshakeable commitment to their son. The HACRO Achievement Awards are an important way of showing our belief that people can turn their lives around and deserve a second chance.”